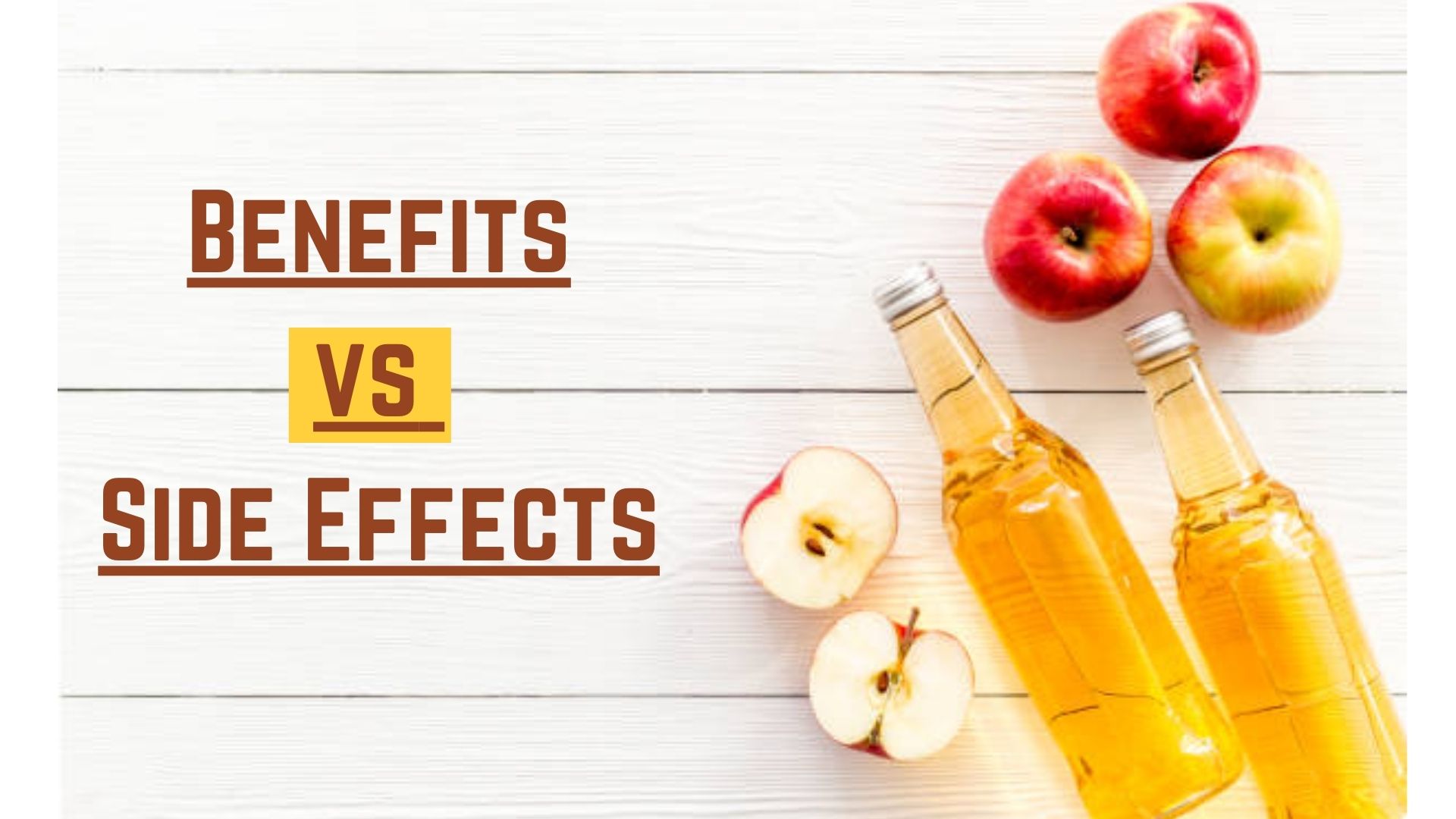 Lately, everybody seems to be talking about apple cider vinegar also known as ACV and it has become a number 1 topic of the town especially in the area of weight loss.

People swear by its benefits.

Indeed they have some benefits.

Vinegar has been a kitchen companion in almost every household for so many years.

But are they really good for your health?

Will its prolonged use have any side effects on our body?

Is it as good as it’s being advertised?

In this article, we are going to talk about the various benefits and side effects of apple cider vinegar.

WHAT IS APPLE CIDER VINEGAR?

Apple cider vinegar is made from apples.

The sugar present in apples is first converted into alcohol by adding yeast.

This process is called fermentation.

During fermentation certain bacteria are formed which further changes this alcohol into acetic acid.

So apple cider vinegar is nothing but acetic acid of apple flavour.

The sour taste and smell of the ACV come due to acetic acid only.

How to choose Apple cider vinegar

There are two types of ACV available in the market.

It is believed that the ‘mother’ present in unfiltered ACV makes it a better option than filtered ACV. The ‘mother’ is good for our gut health.

Also, it is organic.

But the problem is that it has a very strong taste and smell as compared to the filtered one.

Some people may don’t like the taste of unfiltered ACV that much so they can opt for filtered ACV.

Also, unfiltered ACV can come with a lot of impurities because it is in a kind of raw form.

So people who don’t like small particles coming in their drink can also opt for unfiltered ACV.

You can try both of them and find out what works best for you.

Evidence suggests that there are certain benefits of ACV, such as weight loss, reducing cholesterol, reducing blood sugar levels, etc.

Let’s look at the benefits of ACV one by one.

ACV contains only 3 calories per tablespoon and drinking ACV makes us feel full for a long.

So a person doesn’t feel hungry and consumes fewer calories.

As a result, a person loses weight.

However, it is to be noted that it only aids in weight loss.

Just by drinking ACV, you are not going to lose weight.

According to the American Diabetes Association, vinegar may improve insulin sensitivity by 19–34% during a high carb meal and significantly lower blood sugar level and insulin response.

3. Fights bacterias that cause body odour

ACV contains antimicrobial properties. It is very effective in killing bacteria that are responsible for odour.

Bathing with water that has vinegar in it can reduce body odour and so it helps in maintaining hygiene.

Applying a diluted form of ACV after shampoo can remove the dryness and frizziness of the hair.

ACV acts as a toner. You can dilute it with water and put it in a spray bottle. Use this mixture as a toner.

Even if you have small breakouts or pimples on the skin, take a tablespoon of ACV, mix it with baking soda, make a paste and with the help of a cotton swab apply on the pimples.

You must have noticed that after waxing black dots are seen. These dots are the roots of the hair which are still intact with the skin because of waxing in the wrong direction.

To remove this you can apply ACV on the skin, leave it for some time, and scrub. The acidity of the ACV will remove all the dead cells along with ingrown hair.

SIDE EFFECTS OF APPLE CIDER VINEGAR

Along with the benefits there comes side effects too which are not discussed by the advertisers and people are not aware of it.

A study proves that drinking ACV increases the feeling of fullness and some people even report nauseous feelings due to the smell and unpleasant taste of ACV. This results in a loss of appetite.

Exposing your teeth to acid results in erosion of tooth enamel over time. It can also increase sensitivity.

According to a report, a woman suffered severe throat burns after an apple cider vinegar tablet became lodged in her food pipe.

Apple cider vinegar can also cause skin burns. Make sure you do a patch test before applying it on a larger area of your skin especially on the face.

Intake of apple cider vinegar can drop your potassium level.

This is supported by a study that says that a woman who was taking ACV for the last six years was admitted to the hospital due to low potassium levels. She was later diagnosed with osteoporosis which is a disease of bones.

The process of moving food from the stomach to the intestines is slowed down by using apple cider vinegar. Slow digestion can make the situation worse for patients with type 1 diabetes.

If you are on a certain medication, consult your doctor before taking ACV

Some of the medications are

Taking ACV with these medications may interfere with the drugs which may cause serious side effects.

HOW TO USE APPLE CIDER VINEGAR?

Apple cider vinegar is acetic acid. Which is a very strong acid.

So never try to drink it without diluting in water, because doing so can burn your tongue and throat.

Read the instructions given on the bottle and use it accordingly.

Always dilute it in water before applying it anywhere or drinking.

The best way to include ACV in your diet is by using it in cooking for example: in salad dressing or homemade mayonnaise or even in pickles.

However, it is best to start with small doses and check whether it is working for us or not. Avoid taking large quantities in a single day for fast or better results.

It will cause you more harm than good.

Also if you are on certain special medication always consult your doctor before taking ACV.

TIPS TO SAFELY USE ACV

Rinse your mouth before drinking ACV because it will take that unpleasant taste away and if you have sensitivity then also it will help in that.

When you drink it with a straw it will get straight into your throat because ACV can erode your enamel and teeth over time.

Remember it is acidic and it doesn’t suit everybody. If you have highly sensitive skin avoid using it on your face.

If you don’t know about your allergies do consider doing a patch test before applying it on a larger area.

If you are already suffering from acidity problems don’t make it worse by drinking acid. If you still want to try it out, you can use ACV as a salad dressing. Also if you are drinking ACV don’t drink it on an empty stomach. It is not recommended in conditions of acidity.

Apple cider vinegar undoubtedly has a lot of benefits but instead of adding another chemical to our life, we can add citrus fruits like oranges, lemon, etc.

The whole point is to add natural things instead of chemicals.

As far as weight loss is concerned, ACV only aids in weight loss, it is not a primary factor. You will have to change your diet and overall lifestyle to lose weight.

So all the hype that you hear about ACV and weight loss is just a way to make people buy the product.

As per responsible customers, you should think practically about the claims of the advertisers and promoters before buying.

ACV is neither an alternative therapy nor a miracle cure for everything.

Well losing weight depends upon many factors. As far as weight loss is concerned, ACV only aids in weight loss, it is not a primary factor. You will have to change your diet and overall lifestyle to lose weight.

How much apple cider vinegar should I drink in a day?

For drinking as beverage dosages range from 1–2 teaspoons (5–10 mL) to 1–2 tablespoons (15–30 mL) per day mixed in a large glass of water. Avoid taking large quantities in a single day for fast or better results.

When is the best time to consume ACV?