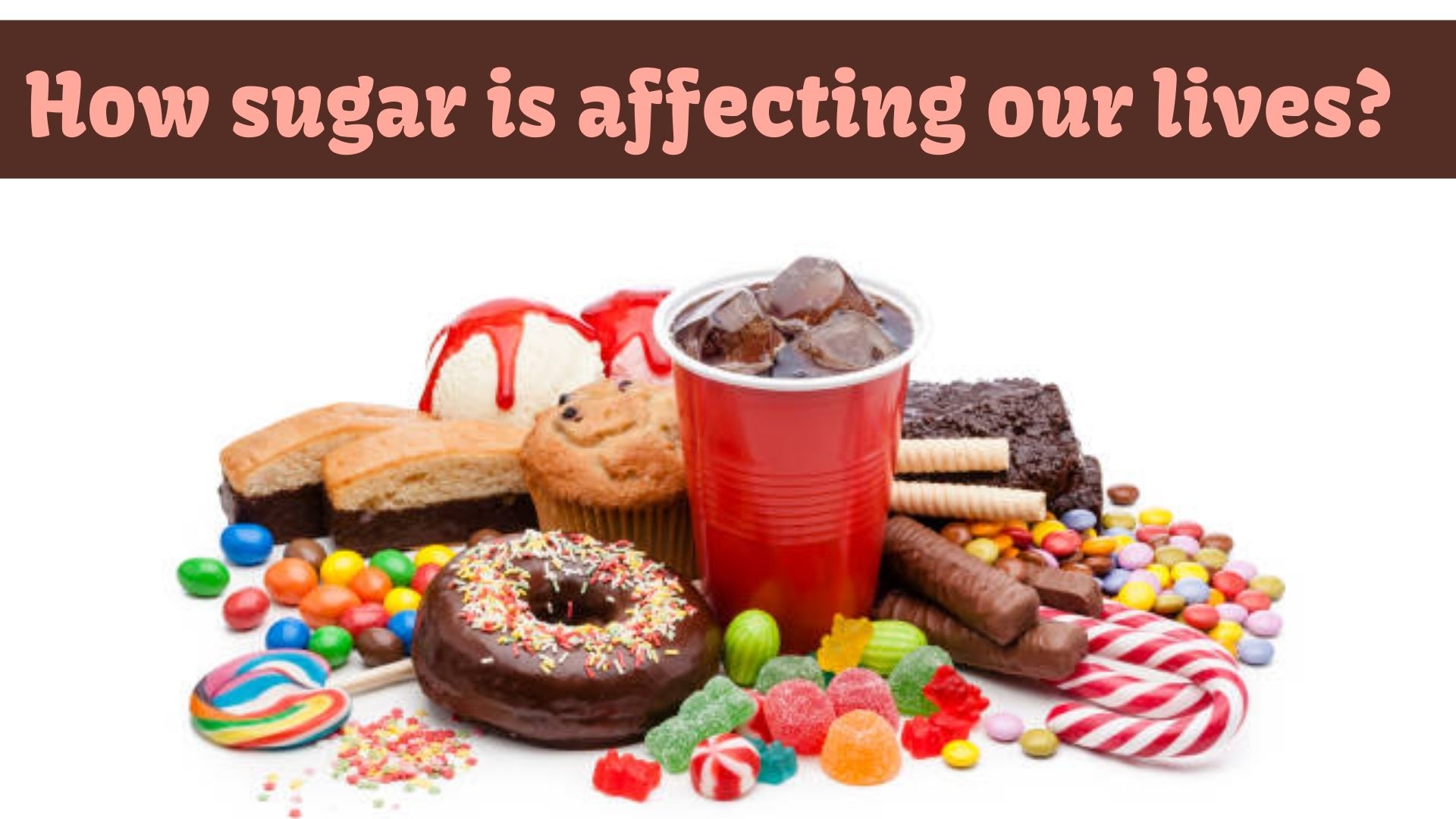 If your house has the food habits of a typical Indian household, you know the importance of sugar.

Sugar is a basic necessity in Indian households.

We need it before exams, during festivals when guests would come to our house and almost on every occasion.

But all this “goodness” and “happiness” that comes with sugar comes at a cost.

In this article we are going to take a look at how sugar is affecting our lives.

Tapasya Mundra, a nutritionist told in an interview that “sugar is a poison and it is the new smoking.”

Many of you might be surprised? But take a look at this graph.

You can see that the number of deaths caused by diabetes in India has increased dramatically from 1990 to 2015. [1]

In fact, in recent years, media reports claimed India to have become the diabetes capital of the world. [2, 3]

Excessive sugar consumption is a major reason behind the spike in diabetes.

Research revealed that an average Indian consumes almost 50g of sugar per day (nearly 10 spoons). Whereas the WHO recommends 10% of your energy intake or nearly 25g (5 spoons) a day. [4]

India didn’t become the diabetes capital of the world overnight.

India has been facing this problem for several years.

Who’s responsible for this?

First, let’s understand what we even mean by when we say sugar.

Apart from white sugars which we see in our kitchen containers, India has a variety of traditional sweeteners such as jaggery (or gud) and Khand.

All three of them are obtained from sugarcane juice but they have huge differences in terms of their processing.

Since sugar is made by refinery processing methods, all the nutrients are exhausted from it, which is why it is the unhealthiest but jaggery and Khand do retain nutrients.

If you look around yourself you’ll rarely find jaggery and Khand but you’ll surely come across white sugar.

How did this happen? To understand this, we need to delve 400 years back into Indian history.

For Indians, sugar has always been a symbol of happiness and celebration but the history of sugar has rather been a bitter one.

The dark history of sugar

Our story starts in the 17th century when the Europeans had colonized most parts of the world.

The Europeans, who traditionally relied on honey which was in limited supply, discovered that some countries in the western hemisphere were perfectly suited for growing sugarcane.

These countries were situated in the Caribbean Islands.

But there was a problem.

So how did the Europeans solve this problem?

By using the slavery trade.

The Europeans brought African slaves to these countries. Moreover, millions of poor Indians were forcefully transported to the colonized territories.

In simple words, sugar was available in abundance in Europe because of the extensive labour done by the slaves in the plantations.

According to research, in India, the reference to sugarcane cultivation and the preparation of sugar is found in an Indian religious text, the Atharva Veda.

In fact, sugar is believed to have been first produced in India in the world.

Traditionally Indians have used jaggery (or gud) and khand as sweeteners.

But as the British started large-scale industrial production of refined white sugar, this refined sugar was introduced to India at the end of the 19th century.

This chemically produced refined sugar is what is found in biscuits, sweets, chocolates, etc.

In the year 1930, the modern sugar processing industry in India was started with a grant of tariff protection to the sugar industry which led to a sharp increase in the number of sugar mills and sugar production.

In fact, between 1930 and 1935, production increased by 460%. Moreover, the Indian government introduced a licensing policy in 1954 that boosted the sugar industry.

Today, India is the second-largest producer of sugarcane next to Brazil.

And while at the time of independence, 2/3 of the sugarcane production was used for producing jaggery and khandsari, now only 1/3 of is used for their production.

So the major portion of sugarcane goes into the production of white sugar.

Why is that the case? Because with industrialization white sugar has become cheaper and its demand has soared.

How sugar is affecting our lives?

Like we mentioned before, white sugar brought with it several problems.

Eating sugar releases a neurotransmitter called dopamine in our brain. Dopamine is a chemical that plays a role in how we feel pleasure. So because sugar leads to the release of dopamine, which leads to pleasure, we love having more and more sugar. [7, 8, 9]

Dopamine is also released when someone smokes a cigarette. Thus, it becomes difficult for smokers to quit smoking.

Eating large amounts of white sugar is strongly linked with an increase in the risk of diabetes. The more sugar you consume the higher are at the risk of you developing Diabetes. [10, 11, 12]

You might know that people suffering from diabetes are at risk of chronic health problems such as heart attack.

A large number of studies have found that people who regularly drink sugar-sweetened beverages have a roughly 25% greater risk of type 2 diabetes. [13] Whereas natural sugars found in fruits and vegetables don’t have the same risk.

Because fruits and vegetables contain natural sugar which is less harmful to your body.

Not only sugar is bad for your health but is also quite damaging to the environment.

Sugarcane is one of the most water-demanding crops in the world. [14]

That water is sufficient for 1,000 people throughout the year.

Unsurprisingly, the cultivation of sugarcane is taking a toll on India’s groundwater reserves.

For instance, in Maharashtra’s Marathwada region, sugarcane requires 2,500mm of water but rainfall in the region is between 500-700mm. Thus, the farmers rely on the groundwater for the cultivation of sugar.

Experts say that the groundwater level in this region is very low that there’s hardly any water left to pump out.

Maharashtra is a drought-prone region and sugarcane isn’t the only crop that the farmers can cultivate there. They can cultivate crops that require less water such as jowar and pulses.

But due to its high returns, the farmers are opting to cultivate sugarcane.

A NITI Aayog report showed that the returns from sugarcane cultivation are nearly 60%–70% higher than most other crops. [15]

For example, one farmer in UP while discussing the high returns for sugarcane said, “We will not get this from any other crop. In basmati paddy or potato, there’s too much of price uncertainty, while the government hardly procures any wheat here.”

Why has sugar consumption increased?

How did it happen? Due to a nexus between the politicians, consumers, and producers.

Three factors are responsible for the popularity of white sugar in India.

Rujuta Diwekar, a popular nutritionist, said that “direct kitchen consumption of sugar in India is moderate. A teaspoon with a cup of tea or a weekly sweet is nothing to worry about”.

The problem arises when people start consuming a lot of packaged food when they’ve no clue how much sugar these products have.

Fruits juices, yoghurts, and breakfast cereals that are promoted as healthy choices are often laden with added sugar.

For instance, consider “health” drinks such as Bournvita and Horlicks.

Basically, the ads show that Horlicks and Complan are healthy. But experts argue that these drinks don’t really deserve their ‘healthy’ tag. For example, 20g of Bournvita contains 14.2g of sugar.

Do you think it’s ‘healthy’?

This myth of ‘healthy’ drinks is created by extensive marketing.

Mahesh Balasekar, a paediatrician, says that “A key reason behind this is the sugar lobby that has a significant influence on how they are regulated by the government”.

Just look at the advertisements that are made for kids.

Rebecca Raj, Professor at Division of Nutrition in St. John’s Research Institute, said that companies are using aggressive marketing strategies such as celebrity endorsements, use of cartoon characters, catchy slogans, and inclusion of free gifts. All these strategies allures kids. She says that these strategies influence the kids’ and families’ purchase choices.

Is there an authority in India that is checking if the products that are advertised as “healthy” are actually healthy?

No, there’s no such authority. One of the key reasons behind this is the political influence of the Indian sugar mills.

In 2018, Smriti Irani, former I&B Minister said in parliament, “The government has no plans to impose a ban on advertisements of high fat, sugar and salt foods.” She added industry bodies like the Food and Beverage Alliance of India have already decided to voluntarily restrict food and beverage advertisements concerning children. Basically, they’ll self-regulate themselves. But experts believe it’s time to move beyond self-regulation and voluntary measures taken by the industry.

How does this industry stay beyond regulation? Like we mentioned before: political power.

Take for instance the case of Belagavi in Karnataka. Former Union Minister Babagouda Patil revealed that “sugar is the most politicized industry in India. All factories are owned by politicians and each politician hopes to own one”.

Due to politicization, sugar is oversupplied in India. India’s demand for sugar is 25 million tonnes per year, but because of political support involved, we have let production exceed 35 million tonnes.

The oversupply of sugar has led to persuasion by sugar mills to increase domestic consumption. The mills have begun an online campaign – Meetha.org to boost domestic demand.

In addition, this politicization is also responsible for the terrible situation of the farmers. Two years ago, of the total 180 sugar factories in Maharashtra that owe payments to sugarcane farmers were linked to one or another politician. The politicization of the sugar industry has led sugarcane farmers across India to wait for dues worth Rs 24,000 crore. This figure continues to grow daily.

The third reason behind the surge in domestic consumption of sugar is the stagnation of the price.

This graph shows that sugar’s price hasn’t really changed in the last 7 years.

Let’s talk about the solutions to this problem.

To tackle this problem, the government, citizens, and industries must perform their duties.

Second, the government needs to help farmers transition away from sugarcane to other crops such as pulses, jowar, and sugar beet. But it’s possible only if the government opposes the political influence of the sugar mills.

The industries need to carry out better labelling. It’s uncertain whether the government will regulate their marketing or not, but we can expect them to not sell us sugar-loaded products tagged as ‘healthy’.

At an individual level, we should replace packaged foods with fruits and vegetables. We should limit the use of white sugar and replace it with khand or jaggery.

Last, probably the most difficult is not to fall prey to the marketing but rather study the nutritional label of the products to check the amount of sugar.

So the key takeaway of the article isn’t that we should cut sugar from our lives entirely.

Many of us love sweets and there’s nothing wrong with it.

But just like excess of everything is bad in the same way when your sugar intake exceeds the limit, it starts creating troubles.

And right now, the government, the sugar mills, and the brands are all culpable of this problem.