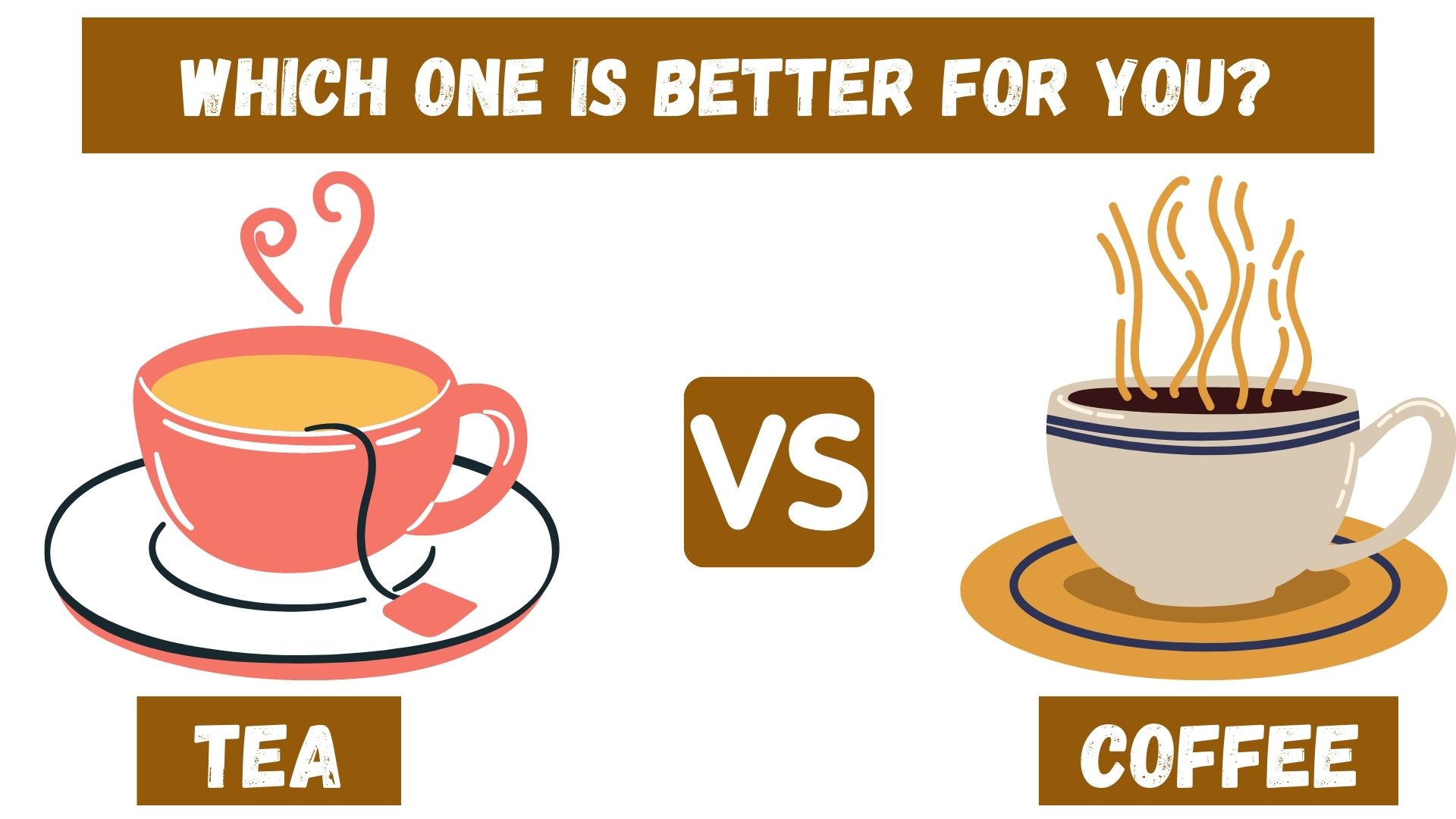 Tea and coffee are the two most popular beverages consumed in India today, as for a major chunk of the population tea and coffee have become an inseparable part of their daily life.

But which one is healthier?

Tea vs coffee which is better?

In this article, I’ll put forward what is modern science take about them and what Ayurveda has to say about tea and coffee.

History of Tea and Coffee

To begin with, you should be aware of the fact that both tea and coffee were not consumed in India until a few centuries ago.

Tea culture in India was introduced by the British in the year 1836.[1]

On the other hand, coffee came to India well before the East India Company through an Indian Sufi saint named ‘Baba Budan’ in the year 1670.[2]

Tea vs Coffee Which is better?

Today tea and coffee have become such an inseparable part of people’s diet that they fail to start their day without them.

But should you be drinking them daily or which is the better choice?

Let us find out!

According to modern science, both tea and coffee are non-alcoholic flavoured beverages that are safe for drinking.

There have been quite a few scientific studies backing that both tea and coffee have health benefits. [3 , 4 , 5]

All the tea varieties are packed with antioxidants that eliminate the free radicals, boosting immunity, reducing the risk of type 2 diabetes and heart attack.

Tea also has a compound called EGCG which helps shrink the fat cells. [6]

Here it is important to talk about green tea versus black tea. Although green tea is marketed as one of the effective drinks for weight loss [7] by companies. Even according to modern science the only difference between them is that black tea is fermented while green tea isn’t.

As a result, the natural amount of antioxidants and EGCG is higher in green tea.

Coming back to coffee, the latest reports of modern scientists on coffee suggests that it too can help in reducing the risk of various types of cancers, diabetes, Alzheimer’s and Parkinson’s disease. [8]

Having said all this modern science does warn on the excessive consumption of tea and coffee. This is obviously because both these beverages have chemical compounds like caffeine and tannin.

Coffee is higher in caffeine and tea has more tannin. While tannin prevents the absorption of iron in the body making it vulnerable to anaemia, it also leads to discolouration of the tea. [9 , 10]

Caffeine on the other hand is a stimulant that robs the calcium of the bones, instantly increases the heart rate and blood pressure. [11 , 12]

Basically, caffeine is a mild drug that gives you instant energy and then suddenly crashes. It is addictive, once you get habituated to it you can’t do without it.

This is the reason you might have heard people complaining that-

“ I can’t work without coffee on my desk”

Here let’s compare regular coffee with green coffee. This is another attempt by the companies to replicate the success of green tea.

So comparatively green coffee beans have more positives but the downsides are also the same if consumed too much.

So how much is too much?

Well, modern science is quite liberal with the amount of tea and coffee that you can consume every day. It says that you won’t be facing any major side effects until you are not having more than four cups of tea or coffee daily but before you go and grab your cup of coffee, there is a catch.

There is a piece of bad news for you if you’re having the habit of drinking tea or coffee first thing in the morning.

In accordance with modern medical science tea and coffee work best for you if they are consumed thirty minutes after a meal either breakfast or lunch.

Tea and coffee are best avoided after 5:00 p.m as they may disturb your sleep cycle. So the modern medical science is clear that both tea and coffee are good for you as long as you do not overdo them. Keep a check on your sugar serving and drink them at the right time. Coffee is definitely higher in caffeine and hence more addictive.

Ayurveda’s take on Tea vs Coffee

Now let us see what Ayurveda has to say about these two popular beverages.

First of all, let’s understand that Ayurveda has a simple funda for any food.

If a particular food item doesn’t grow within the hundred-kilometre radius from your location that food item should not be a part of your daily diet and for tea and coffee this holds true for a major chunk of the Indian population.

Talking generally about tea and coffee Ayurveda terms them ‘extremely drying’ and something that increases heat in the body.

This is the reason in India ‘chai’ has always been served with milk in it.

According to Ayurveda tea and coffee are highly acidic and disturbs gut health. [14]

Ayurveda also cautions that tea and coffee should only be consumed when the ‘kapha’ element of the body increases. That is if you are down with fever, having a runny nose, oily skin, suffering from cold and cough or sinus.

It’s only in these conditions tea and coffee can be consumed in little quantity as medicine.

Although Ayurveda has a much better substitute to offer which is rather alkaline, controls the blood sugar level and is excellent for the heart.

Arjun Tea is prepared from the bark of the Arjun tree. It has many benefits and absolutely no side effects.

It can be prepared just like you make tea with milk.

It is actually an Indian chai in the true sense even better because you can consume it as your morning bed tea. It is easily available as well.

So Ayurveda is firm as to why tea and coffee are medicinal and should not be consumed daily. It suggests a better substitute in the form of Arjun tea which has numerous benefits without any side effects to keep your body, mind and soul healthy.

What’s my take on tea versus coffee?

Let’s be honest tea and coffee have become such an integral part of our diet today that omitting them completely is kind of sacrilegious.

Although if you are at a point where you can’t work normally without tea and coffee.

Isn’t it an addiction?

Can’t we choose health over taste?

Of course, I understand that it’s not easy to stop consuming them at once. Having said that I strongly believe that one can easily begin replacing them with some really good options which serve the same purpose but do not adversely affect the mind and body in any way.

Alternatives of tea and coffee

Arjun tea is great, you must try it once.

A herbal concoction made out of boiling basil leaves ginger black pepper and cloves once ready, you can sweeten it with honey or jaggery powder. It is so refreshing and even looks like black tea.

Hot chocolate is another go-to option. Simply boil the milk and mix half a teaspoon of natural cocoa powder in it.

High in magnesium, it gives you the much-needed boost of energy. You can try replacing tea and coffee with hot chocolate without compromising on taste and effect.

There are times when we just feel like drinking something hot, trust me in those cases even hot water works so well.

If you want to attain the optimum level of physical health and mental well-being, stay away from stimulating drinks like tea and coffee.

Switch to healthier alternatives instead. But if tea and coffee are more than a drink to you, switch to decaffeinated coffee with 97 per cent less caffeine content De CAF coffee will taste almost the same but won’t have such a stimulating effect, although it does pose some problems but you are still in a better state.

Likewise, you should also make an attempt to sweeten them with jaggery powder or thread mishri, they are alkaline and so they neutralize the acidic effect of tea and coffee to some extent and will also keep you away from the nutritionless solids which we call sugar.

Just the taste or taste with health, the choice is yours.